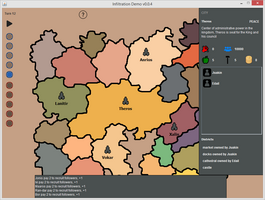 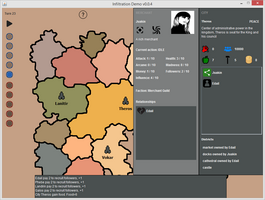 Living cities is the name for Infiltration fourth update.

I've put in past months some effort in create a simulation in order to make and feel the game more "alive". In this update, now characters fight between themselves to control city's district. To do so, they will use money, followers and influence to solve quests, gain more resources and acquire district's access.

But what about the player? As you already know, Infiltration is a game about being an ancient evil, escaped from a magic prison and in search of forgotten knowledge. Mortals can fight between themselves, but you can manipulate them, forcing them in searching this knowledge and gain more power.

So living cities is the natural update for this prototype: now this is more a game then a prototype!

Let's play and let me know what do you think, where I can improve to make it more fun!