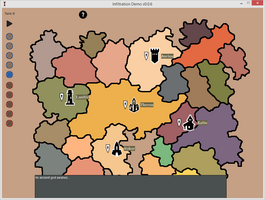 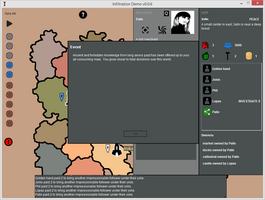 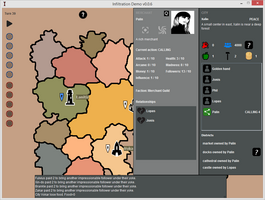 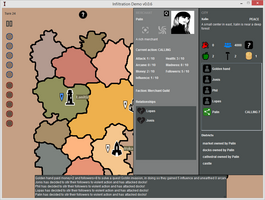 Welcome back for a new release of Infiltration an ancient evil prototype!

In this version I've worked on many feedback I've been received on version 0.0.4 and 0.0.5 and improved user interface.
In particular now it's more clear what user can click, because every clickable element in the game has an "on over" image,
so just move the mouse and click.. you will see the effect! I've improved a little bit the general feeling of the game with new icons from Skyrim map set and a little new icon
near every city, so you get quickly the idea where you have already corrupted agents and where not.
There is also for every NPC a little quest log, so you can follow every win and losses for every actor in the game,
without lose everything in the "main log" on bottom part of the interface.
Now it's also more clear what an NPC is doing because in actors list there is a quick view on current action and a counter:
this counter is the time that action require in order to be completed. This will include both player actions (focus, calling) and
NPC actions (investigate for example).

The game has now a radical change that will alter how do you play this prototype and, even if I like ui changes and feedback on this side,
I'd like to know if this change it's okay for you or not. I'm talking about the link between a district in a city
and a secret.
As you know, in this game you are an ancient evil trapped in a prison and you have to find hidden knowledge of the world
in order to become powerful again. To do so, you will focus your power on mortals, establishing a link to their mortal minds,
then send them in active search of hidden knowledge, using calling action.
This action is really powerful, but after is completed, you will gather information on where the secret is located.
If you are lucky, could be the same district that belong to your puppet, but if you are not lucky.. you have to decide.
It's better to send my puppet against the mortal that own the district, or focus and then calling again the mortal?

I believe that this little change is a radical change in how player will play the game and a fundamental stone on how player can manipulate mortals in following his plan.

Let me know what do you think!